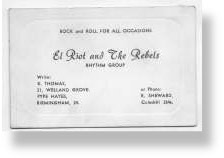 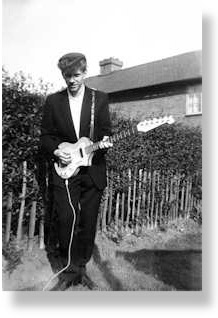 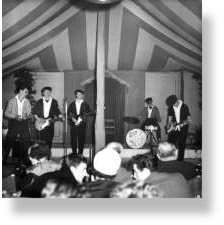 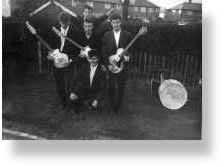 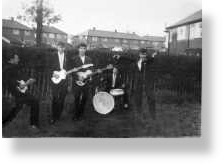 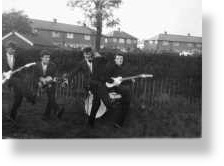 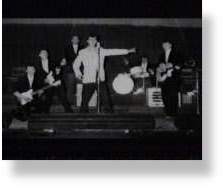 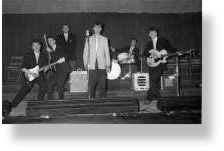 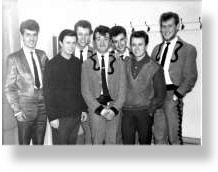 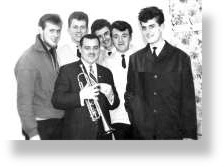 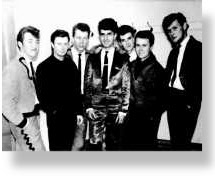 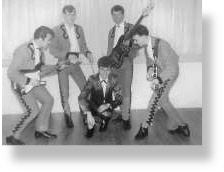 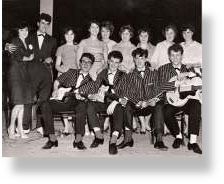 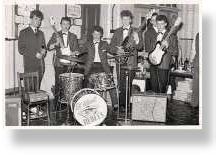 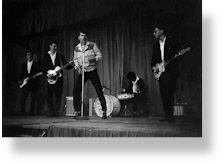 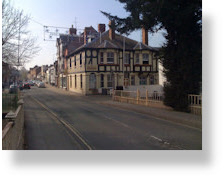 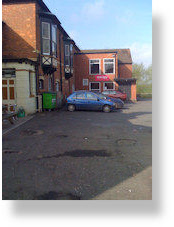 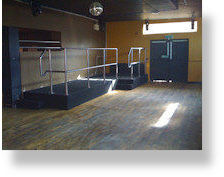 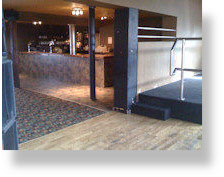 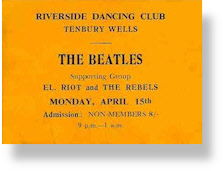 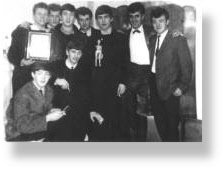 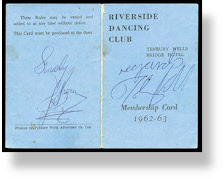 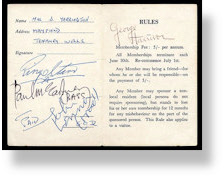 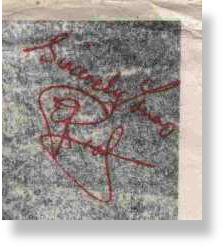 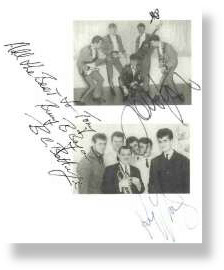 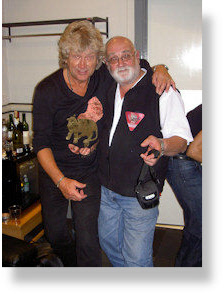 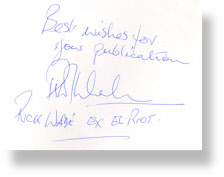 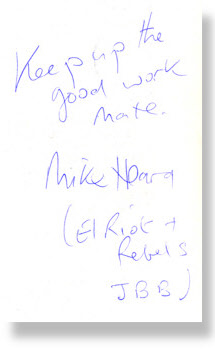 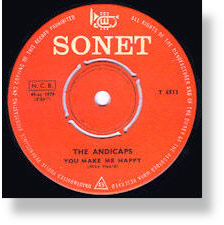 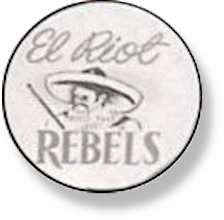 Out of the ashes of the Saints & Sinners, Ray Thomas (vocals) and pal John Lodge (bass) came
together to try their hand at musical stardom, bringing in Bryan Betteridge on lead guitar, Mike Heard
on rhythm and Ricky Wade ex Saints & Sinners on drums.

A band name need to be chosen, and, with news stories of riots in Equador, Al Riot & The Rebels
seemed a good choice, with Ray deciding on El Riot instead. Bryan became Bunny B and
John became Johnny C Storme – still playing the bass strings of a standard Hofner lead guitar.

Ricky’s bass drum looked impressive with its Mexican bandit
artwork, attracting much attention on the corporation (public) bus
as he carried his kit to and from shows.

Pleased with his prior recording session, Ray returned to
Hollick & Taylor’s to record another 10” 78rpm acetate, this time
standards Down The Line coupled with Blue Moon, both honed
during his Saints & Sinners days. Note, these recordings were
played on a BBC radio programme and were finally released
(from the BBC recordings) on the Classic Artists DVD in 2006.

One day, they had organised a double booking, starting at a high street dance hall in Erdington, to be followed by a show at the Moat House. Mike recalls that the first went rather badly and none were too enthusiastic to repeat the performance that night. However, buoyed by a tip from the proprietor Mrs Pryke that a guy from the TV was in the audience, the show went like a dream, the contrast was incredible and producer John Pullen and organist Jerry Allen came over to introduce themselves – their invitation to appear on the lunchtime TV show Lunchbox being eagerly accepted.

The band gained a good reputation, Ray even valiantly performing shortly after undergoing a painful appendix operation! The pub shows were however, becoming increasingly hard with an underage drummer so, deciding to fulfil his ambition of travelling the world, Ricky left to join the Navy, being replaced by new drummer Rob Sheward, just in time for the Lunchbox engagements.

Hosted by celebrity Noele Gordon (of Crossroads fame), three appearances took place, each with a Rebel’s instrumental and, to close, a rousing El Riot led vocal performance. Various stars of the day shared the bill including Eddie Calvert and the Brook Brothers. Unable to attend one of the shows, Rob’s place was temporarily taken by Roger Spencer, later to find success as part of the Idle Race.

Covers of Cliff Richard & The Shadows and Eddie Cochran were the order of the day with gigs organised by level headed Rob. Rob even ferried the band to the shows too such as The Forrest Pub, Bromsgrove, the Navigation and The Norton, Sutton Coldfield. For a while, John had taken to using a 6 foot bass cabinet with a speaker at the bottom, probably visually more impressive than its output warranted!

Things were really looking up when they secured a residency at the Tyburn pub where Ray’s Be Bop A Lula and Say Mama brought the house down and Bryan’s skills on the guitar were shown off splendidly with Duane Eddy’s Rebel Rouser and Tequila. In keeping with the theme, Pat Boone’s Speedy Gonzalez also became a popular part of their act, particularly with the new Mexican stage suits and sombreros.

A highlight came on April 15th 1963 when, at a regular haunt – The Riverside Dancing Club, Tenbury Wells, they were booked to appear alongside rising stars The Beatles, a day that still generates much discussion in the area. Fortunately the two bands paused for a photograph however, what George was doing exactly with the Barbie doll is anyone’s guess. Interestingly, it is reported that this was the day that Lennon first saw his week old son Julian.

Following a brief stint with The Rocking Tuxedo’s, Mike Pinder was enlisted for a short but memorable tenure, his talents on the clavioline keyboard bringing a new dimension to the band and a smile to their faces with his comical tales of the army life he’d left behind.

Norrie Paramor had his sights on signing the best of Brum’s acts to EMI and arranged for auditions to be held at the Moat House, with most of the area’s top performers turning out in anticipation, with much expectation on the Riot’s standing out from their peers. Surprisingly, it was not to be El Riot’s day and rejection was a bitter pill to swallow.

Disillusioned, and keen to explore the burgeoning Hamburg scene, Ray announced his intentions to take a trip abroad – “who was coming?”. With family and business ties holding back the others, Mike Pinder was the only Rebel up for the jaunt, so, off to sample the delights of Hamburg went the Krew Kats.

Bryan Betteridge went on to record with popular band The Vogues and then The Olympics.

Mike Heard rejoined John in The John Bull Breed.  He later recorded an original composition with The Andicaps, You Make Me Happy c/w It’s So Fine. The band which had previously included ELO's Jeff Lynne.

Rob Sheward was to move with John onto The Carpetbaggers.